The popular Bosnian band Dubioza kolektiv had a concert in Ljubljana on 16 November 2017, which some students of Slovenj Gradec high school attended.

We boarded the bus at Nama Nova and drove to Ljubljana with Vojko and teacher Jože Rev and there were no problems until we arrived in Ljubljana.  There we found out that we have two problems. The lesser of the two was that we were an hour early and we had to wait for a half an hour until the doors of the hall opened, but the larger problem was, that the minimal age for the concert was 16 years. This was a problem, because a larger part of the high school students were 1st year students, which meant they were younger than 16 years. Nevertheless, they were able to get past security, by signing a piece of paper. When we got into the concert hall, we waited for about 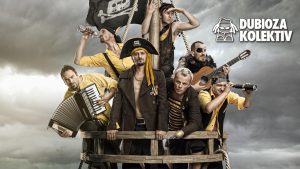 half an hour and then the supporting group arrived …

The supporting group was a group called Super action heoes and they were dressed as superheroes, and their songs were a mixture of a cover song and original songs.

After about an hour and a half Dubioza Kolektiv finally arrived and they played all their hits including USA, Free.mp3, Kažu, No Escape (from Balkan), etc.

The public was dancing without stopping during the entire show and they managed to keep this great party atmosphere during the whole performance. They played from cca 22.00 till 1.00 in the morning, because they had 2 encores. After they had stopped playing we had approximately 15-20 minutes to gather in front of the concert hall, my friends and I used this time to buy some T-shirts.

We left Ljubljana at around 1:30 in the morning and returned to Slovenj Gradec at around 3.30 and were lucky because the principal allowed us to miss the first two periods the next day, a gift most of us welcomed.  But we still only got a few hours of sleep that night.

Because one concert a week is not enough for Slovenj Gradec high school students, we attended  another one that same week when Riblja Čorba was preforming in Stožice. It was their 40th anniversary that Saturday. We attended this concert with Vojko, Rev Jože and Alenka Kac Herkovič.

We gathered at Nama Nova and went by bus to Ljubljana. We arrived at Stožice, went inside to buy some popcorn, tried to find a place to put out coats and waited.

After Van Gogh’s excellent performance  there was a few minutes of silence and when some band members  started appearing  on the stage I thought to myself they looked a little bit too young to have their 40th  anniversary.  I said that to my friend and she agreed and said they looked a little bit like Mi2 and while she was saying that the band started playing “Pojdi z menoj v toplice” and our suspicions were confirmed.

The band on the stage was actually MI2, they were invited to play a few songs as guests. Later on we found out that MI2 were guests because they were huge fans of Riblja Čorba and they have been listening to them since they were teenagers (some members of the band even stayed and danced in the VIP place under the stage). 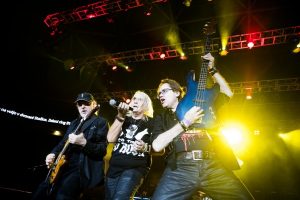 Finally Riblja Čorba  with Bora Đorđević appeared on the stage, they played most of their hits including Lutka, which was entirely sung by the audience, Dva dinara druže, Ostani đubre do kraja, Napolju, Dobro jutro,…They had a great concert and a lot of guests, including  Đorđe David from Generacija 5 (also a Serbian rock group), who sang Dolazim za 5 minuta (a song written by Bora Đordević), Azra Kozličić, who sang Daj ne pitaj and even a mixed choir from a Maribor retirement home, which had 25 members whose average age was about 83 years. ☺ The concert ended at about 1 in the morning and everybody looked happy and glad after the concert. We had a great time.

THE DUO THAT ROCKED OUR WORLD