HOW VEGANISM COULD SAVE THE PLANET

HOW VEGANISM COULD SAVE THE PLANET

Being a vegan or a vegetarian is not such and abstract concept anymore, in fact veganism has grown from only a few million in the nineties, to around 950 million today. It is not only beneficial for human health, but it could also have a huge impact on the environment. 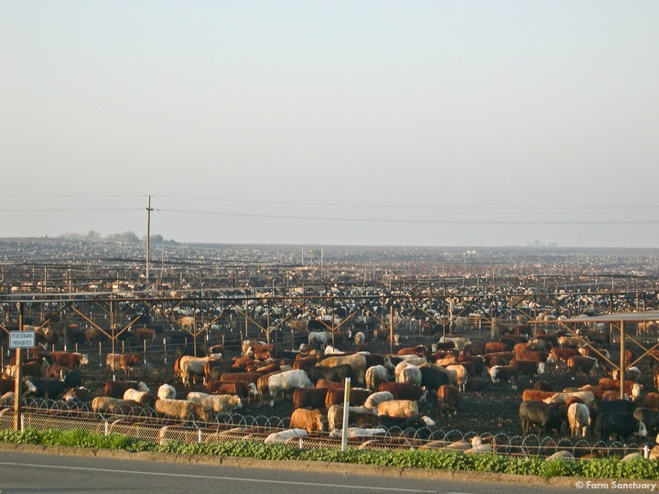 ​Meat production is a major contributor to global warming, and rising temperatures alter habitats, reduce food sources, and cause drought. All the livestock in the world cause more air pollution than the entire transportation sector combined. In addition to directly contributing to climate change, the production and delivery of meat helps to drive up the use of carbon-rich fuels.
A vegan diet could also conserve water. Hundreds of millions of people around the world do not have access to clean water. Animal agriculture wastes enormous amounts of it and is also one of the biggest polluters of fresh water. ​An individual eating a vegan diet can save an estimated 2000 litres of water a day and cutting down on just one kilo of beef saves 15,000 litres of water.

Industrial production of animals like pigs, chickens, and cows is the main source of freshwater pollution. Concentrated animal feeding operations pollute rivers, contaminate groundwater, and degrade lakes. According to the U.S. Environmental Protection Agency, “A farm with 2500 dairy cows produces the same amount of waste as a city of 411,000 people”. Raising livestock costs a lot of energy. It takes a long time to raise animals; they consume a lot of food that was cultivated on land that could have been put to other use; meat products need to be shipped and refrigerated; and meat takes a long time to process from slaughterhouse to kitchen table. It is said that plant-based proteins can be raised with 8 times less energy costs than meat-based proteins. Veganism could combat world hunger. It is estimated that 700 million tons of food that could be consumed by humans goes to livestock each year and that 82 percent of starving children live in countries where grain surpluses are fed to animals eaten by individuals in developed countries. Besides, all the deforestation, overfishing and pollution caused by meat and fish industries limit the overall capacity of the Earth to produce food. The global population is expected to hit or surpass 9.1 billion by 2050. There is not enough land on the planet to raise enough meat to feed everyone, nor can Earth deal with the pollution this would cause. 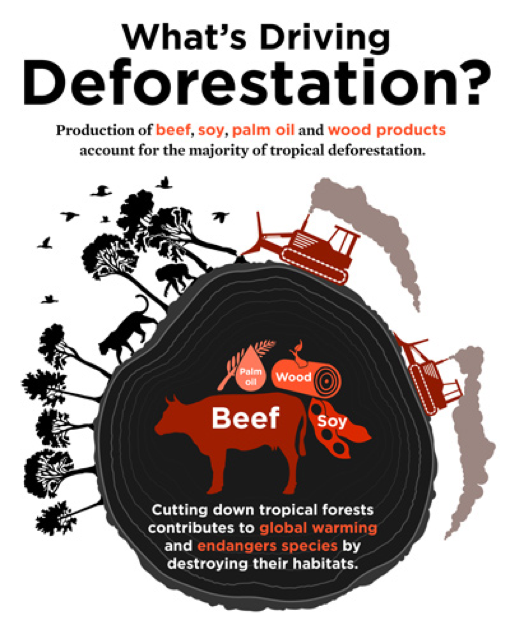 Across the world, rainforests are disappearing alarmingly fast. Vast tracks of forests are cleared for beef cattle grazing and to grow feed crops like soy and corn. As a result, beef is now the biggest deforestation driver in the world; 91 percent of Amazon destruction is caused by animal agriculture. Deforestation threatens biodiversity, endangering species like the jaguar and displacing and exploiting local people. Deforestation is responsible for about 15% of human-caused greenhouse gas emissions and is an even larger threat to the climate when carbon-rich tropical forests are cleared. When forests are cut, carbon is released into the atmosphere, contributing to global warming.
Meat industry not only contributes to environmental issues, but it is also unethical. The current methods of farming animals for human consumption are shockingly cruel. Livestock are kept cramped in close quarters, often unable to move entirely, wallowing in their own waste. Because they are viewed not as living beings but as commodities, they are treated at best with indifference and at worst with violence. Humans don’t require animal products to thrive, and plenty of plant-based food options are available to most people. Veganism is not so much out of reach anymore as it was in the past and even small changes, like cutting out meat out of a meal can have an impact. 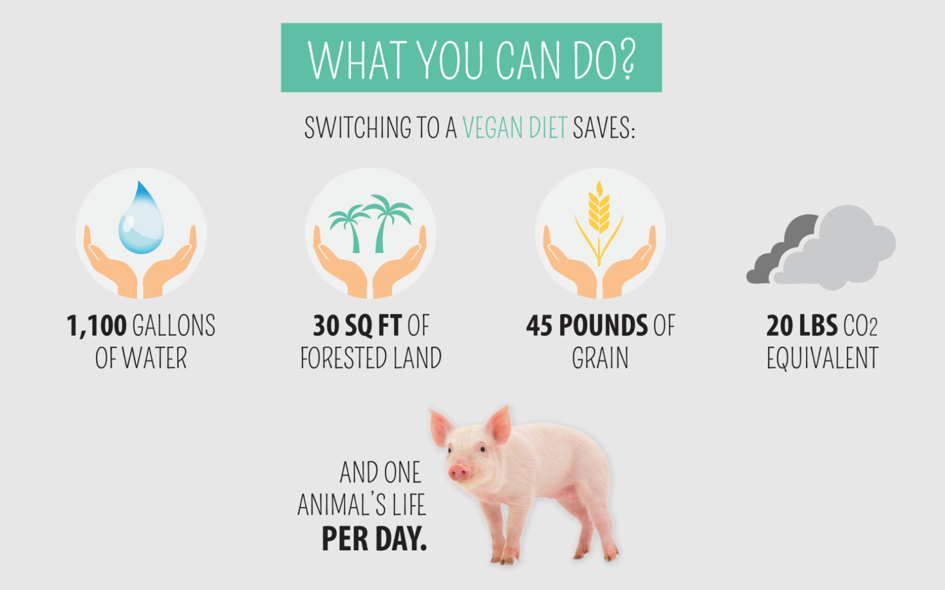 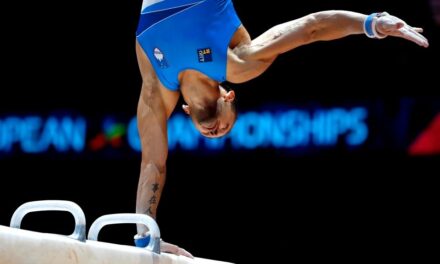