EXCURSION TO ZÜRICH, STRASBOURG AND BRUSSELS 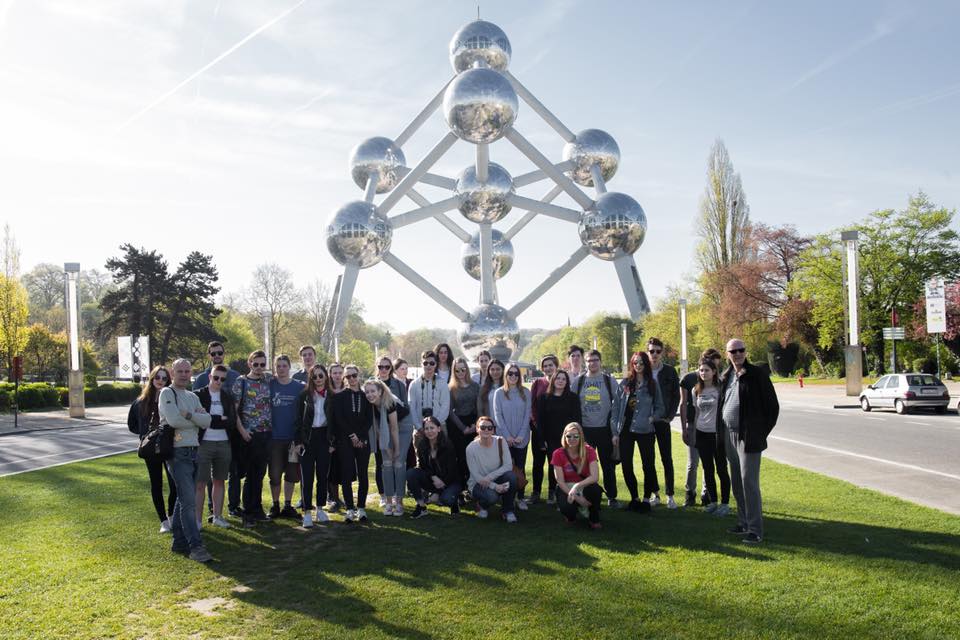 The long expected journey finally happened! My class, the class 3.a (and a few students from 3.b and 3.c) had been waiting for this trip for the entire year and now we finally packed our things and cameras and took off in the middle of the night on Monday, April 16th.  I was very excited because it was my first time visiting Liechtenstein, Switzerland, France, Luxembourg, Belgium and Germany. 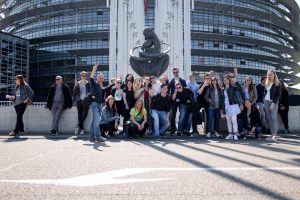 The trip took us a whole night so I would rather not talk about the wars we almost had among ourselves for two seats on the bus. Everyone wanted to sleep comfortably as much as possible but not everyone was lucky enough to have their own two seats. We somehow made it through the night and woke up in the morning at the border between Austria and Liechtenstein. It was a foggy morning and I felt kind of relieved that I took my umbrella with me in case of rain at our first stop – Zürich, but fortunately, as soon as we came in the city the clouds vanished and sun came out and warmed our happy and excited faces. 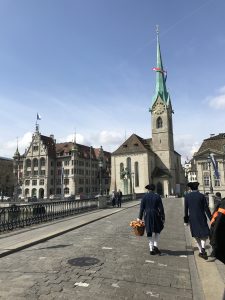 Our tour guide took us on a city centre tour, where we saw a lot of gorgeous old buildings, churches, streets and markets. We admired the beautiful and enormous Zürich’s lake and boats in the marine. Interestingly enough, the canton Zürich had a holiday on the same day, April 16th, called Sechseläuten, which gave us an opportunity to be a part of traditional life of the Zürich’s people. A lot of people were wearing interesting costumes they used to wear in 18th century. The stained glass and crypts I saw in the Grossmünster church made a great impact on me, but it was sadly forbidden to take pictures in the church. After we had seen the main attractions we had some free time for about an hour. I and my friends enjoyed a cup of coffee and a piece of cake in the café and then returned back to the arranged spot. We continued our journey to Strasbourg, France. Weather was warm and sunny the entire day, and it was the same when we came to Strasbourg. Strasbourg’s architecture and particularly the Notre Dame Cathedral took my breath away with all its majestic presence. I can hardly imagine how people managed to build it a few centuries ago, because it might as well be the highest old building I’ve ever seen in my entire life. The streets were filled with people and we finally got the opportunity to eat dinner, because we were famished. 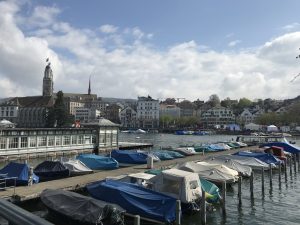 Later on the bus took us to our hotel where we stayed the night. In the morning we ate our breakfast, packed our suitcases and returned to the Old Centre of Strasbourg, to examine La Petit France, a historic quarter of Strasbourg. It was a sunny morning, which made this part of town even more beautiful. It was lovely observing the trees blooming in front of the buildings with typical medieval architecture. 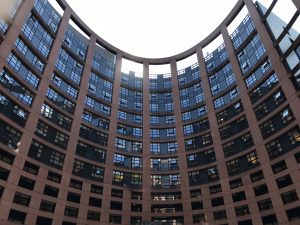 After seeing this part of town in the forenoon, we took off to the European parliament in Strasbourg. Seeing this institution and maybe some Slovenian members of the European Parliament was actually the main purpose of our excursion. We had to go through security-check, like on the airport. The whole building is enormous and is in a modern style, it has a lot of windows and it is in the shape of circle. It is called Louise Weiss building and it was inaugurated in 1999. We were welcomed by a Slovene representative, who told us something about the institution and European Union itself, most of which we were familiar with from our school subject European studies. After an hour and a half we went on a small tour through the parliament. We went to the conference hall, a hemicycle, but unfortunately all the members of parliament went for a lunch at the time, so we weren’t able to hear the whole discussion. A kind lady led us into the room in a shape of a circle, where we watched a movie about the importance of European Union and advantages it brings us. 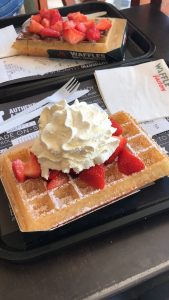 At about two o’clock we went back to our bus and started our journey to Brussels, Belgium. We drove through Luxembourg and came to our hotel in the evening. Because that was our last night together, we hung out until midnight or maybe until 1 or 2 in the morning. J When we woke up at 7 o’clock we filled our tummies with breakfast and packed our things and drove to Atomium, where we took A LOT of pictures in front of it. After “our photoshoot”, we continued to Brussels’ centre. We drove past main European Union’s institutions, such as European Commission and European Council. In the centre, our tourist guide showed us some attractions including the Manneken Pis (peeing boy statue). We had an awesome opportunity to visit a chocolate shop, where we tasted the best Belgium chocolate and bought pralines and chocolates for our families (and of course ourselves). Later on, we had some free time to try famous Belgian waffles and Belgian fries until 2 o’clock when we had to say goodbye and started our 16 hours long journey back home. 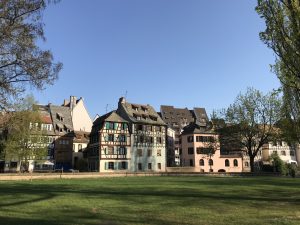 This excursion will surely be one of the best times my high school has ever offered me. I had a lovely time and I believe we all did, if we subtract the pain in the back or lack of comfort on the bus. The best thing is, I had the chance to travel with my best friends, who made this trip even more special.  I feel a lot richer in my soul because of all the things I have experienced, magnificent buildings I have seen, laughs we have had together and sweets I have eatenJ.  I would like to thank all my schoolmates, teachers, the tourist guide and drivers for making this excursion extra awesome. I will cherish these moments in my heart for entire life and maybe one day I may revisit the places to relive them.